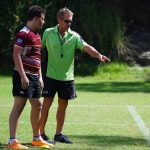 After 5 years as the Director of Coaching, the Next Gen Rugby Coaching team is now headed by Michael Broad. Michael is a Rugby AU Level 4 accredited coach and has over 50 years of experience playing & coaching at all levels of rugby. Michael brings to Next Gen Rugby Coaching an extraordinary level of practical on field coaching and off field administration having been the Director of Sport at St. Joseph’s College Gregory Terrace for 24 years as well as years of professional coaching along with his representative playing and coaching career. Michael has had professional development stints at various Super Rugby franchises – namely, the NSW Waratahs, Queensland Reds, Western Force, the Sharks of Durban and more recently with the Mitre 10 Cup team from NZ – the Tasman Makos in 2018. In 2019 and 2020, Michael attended the Rohrig Rugby Development Academy facilitated by staff of the Mitre 10 Cup team from Otago RU.

Supporting Michael is a team of experienced adult coaches and former players. Next Gen Rugby Coaching prides itself on offering both players and coaches a quality education and experience and this can only happen by having a quality team. Our team of coaches have all coached and played rugby union at high levels and each member is grateful for the opportunity to assist in the improvement of our Next Generation of players and coaches.